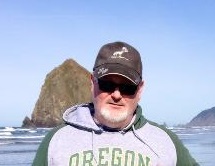 Beggars Union was an idea that came to him as he watched freeway off-ramp panhandlers swapping cardboard signs and chatting during shift changes, and he wondered if they were organized. An article in the local paper soon thereafter indicated yes! So after years of working in a variety of call centers, and writing down everything silly that happened, he decided to write a novel about a young man who comes from a family of shysters and card-carrying placard carriers, but who wants to strike out on his own. And strike out he does!

It's a comedy about poverty and fraud. What could possibly go wrong?