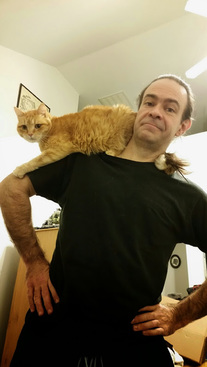 C.B. Ash spends his days going in several directions at once ... surprisingly, he tends to thrive that way! Software architect by day, he is also a very hard working writer by night. His first humble attempt, Kinloch, arrived in May of 2004. After that, was the first book of his Tales of the Brass Griffin Steampunk series, Red Lightning, in 2009. Then comes Deadly Dispatch, the first of the fantasy-western Solarpunk series Wayfarer League in 2016.

C. B. has kept quite busy over his life. With degrees as a Physical Scientist, Mathematics, and Computer Science, it seemed only natural that he started out rather young teaching martial arts. Well, it made sense to him. Beyond that, he’s spent his time also working in the IT industry, as a lab technician, a consultant, a software engineer, and last a software architect. Because, variety is the spice of life, and indecision is a horrible burden.

Through all of that, he’s kept fingers to the keyboard - or pen to notebook - writing. He does promise that he actually sleeps. Usually that would be between the hours of one and three am, or at least that’s what he admits to. Otherwise, people might start to wonder about him.